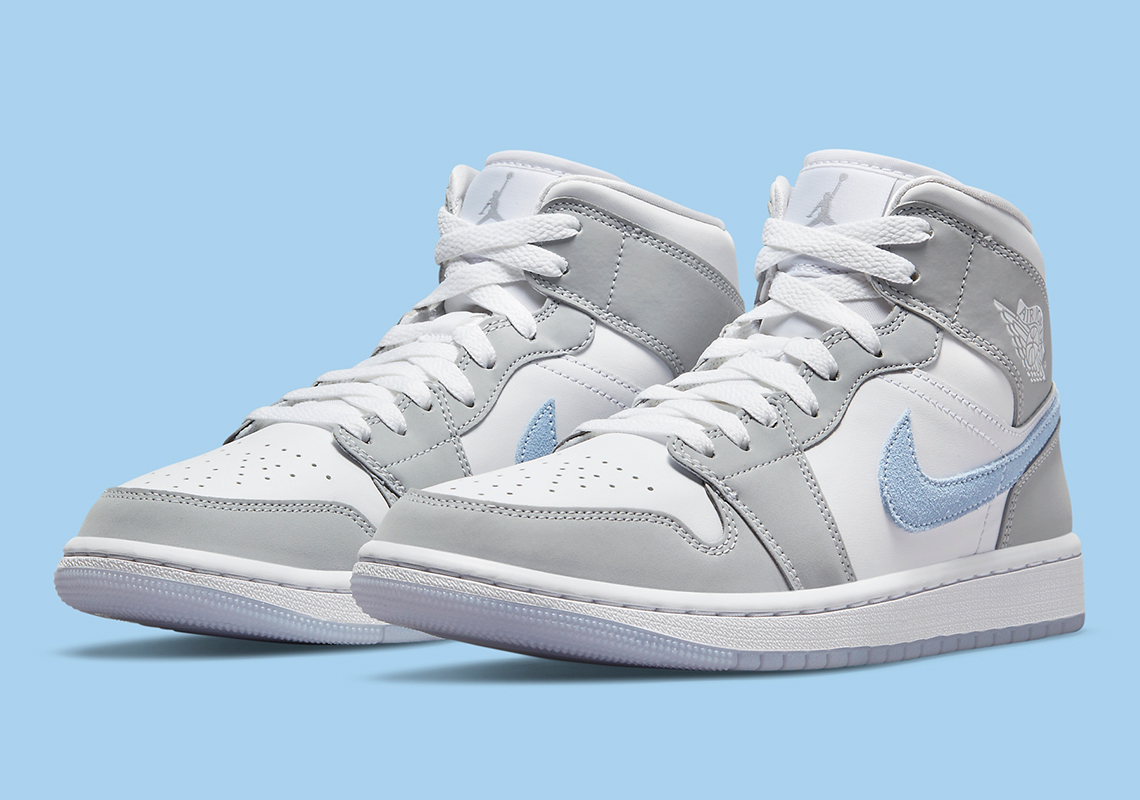 Wondering what the best upcoming sneaker releases are? We’ve got you covered. If you’re looking for your next hyped pair of kicks, keep reading. We’ve put together a list of the five best Nike sneaker releases to look forward to.

Throughout the year, Nike launches a huge variety of different sneakers, with each month having its own highlights every sneakerhead should know about.

Best upcoming sneaker releases round up

2020 saw a lot of incredible sneaker releases, but one specific collaboration stood out in particular. The Dior x Air Jordan 1 was one of the most hyped and coveted shoes that year, but probably also one of the most expensive ones.

Now, we can witness the drop of the Air Jordan 1 Mid Icy Swoosh in July, which is strongly reminiscent of the highly pricey Dior collaboration.

Pictured above, you can see that the overlays have been painted in a specific grey tone that comes very close to the shade of the hyped release. A white base in combination with an icy blue swoosh gives a perfect resemblance to the lavish Dior version. Even the characteristic transparent outsole made it onto the new sneaker.

So in case you don’t want to spend 10,000 Euros on a shoe, but your trendy personal style demands that you own something similar, you should definitely take a look at the Air Jordan 1 Mid Icy Swoosh instead.

No list of the best upcoming sneaker releases would be truly complete without an Air Jordan 1 release included. From Nike, The Air Jordan 1 High OG Electro Orange is reminiscent of the legendary “Shattered Backboard” colourway which has been applied to the cult sneaker several times already.

Alongside deviating from the well-known name, the release also mixes things up in regard of colour placement. The characteristic orange is being used very sparingly, only making an appearance on the collar as well as the outsole. Most parts of the shoe are white, while the overlays near the toe box and the eyelets have been painted in a deep black together with matching laces.

The Air Jordan 3 definitely belongs to the most relevant sneakers in MJ’s signature line-up. With the AJ3 Racer Blue, the silhouette received a clean makeover that stays true to its roots and makes use of the characteristic elements of the cult sneaker.

A white leather base is taking up most of the space on the shoe, while blue accents are being used on the midsole, the collar and some parts of the eyelets. The very famous elephant print on the overlays can’t be missing, which make the Air Jordan 3 so distinctive. The grey details harmonise very well with the minimalistic appearance of the shoe.

In 1996, Michael Jordan starred in one of the most iconic basketball movies in history: Space Jam. After 25 years, LeBron James now continues MJ’s legacy with a sequel that comes with a brand new story. Simultaneously, Nike provides the sneaker community with a whole pack that includes several shoes referring to different characters in the movie.

The Space Jam x Air Force 1 Toon Squad is part of that collection and visualises both Bugs and Lola Bunny. The Base is covered in a clean white, while striking blue accents are being used on the outsole, swoosh, heel cap, insole and tongue tag. Lola and Bugs have been placed near the swooshes on the sides, while also being present on the tongue tags.

There is probably not a single month where we do not witness the release of a Nike SB collaboration. For the Ishod Wair x Magnus Walker x Nike SB Dunk High collab, Nike teamed up with Magnus Walker and turned his favourite car, a very special Porsche from 1971, into a unique sneaker.

Therefore, a white/blue/red colour scheme has been applied to the release, referring to the colours of the unmistakable car. A small portion of the sail upper has been equipped with a used vintage look, while the remaining elements are wrapped in an extremely soft leather. Red canvas is making an appearance on the toe box as well as the heel, while the lining received a chequered pattern.

A bold red “277” has been placed on the lateral sides as well as the insoles, while two-tone laces top off the entire design perfectly. The vintage looking Ishod Wair x Magnus Walker x Nike SB Dunk High is probably one of the most unique sneakers in 2021 and rounds out our list of the best upcoming sneaker releases for your pleasure.

MORE – History of Louis Vuitton: The Making of a Super Brand