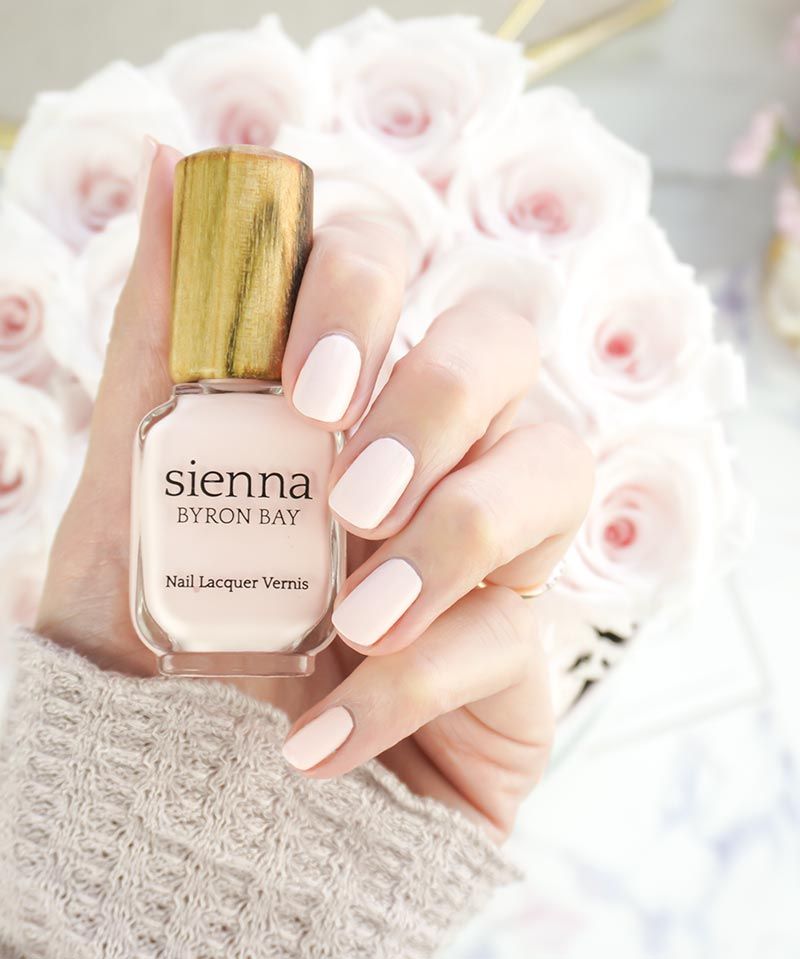 A brand that started in a lounge room in Byron Bay, a coastal town known for its natural beauty and attractions, Sienna embodies the ideology that beauty should be kept as clean as possible.

Much like the town that it was born in, Sienna nail polish strives to be as green and sustainable as possible, and this ideology has leaked into other aspects of the brand, starting from sourcing and manufacturing, down to marketing.

Being environmentally conscious is only one part of the equation, and the brand hopes to influence the beauty industry to be accountable.

First up, Sienna is the first nail polish brand to stop using glitter. While glitter is undoubtedly pretty, it is a microplastic and horrendous for the environment. Like plastic, it takes years for it to degrade, and it finds its way into rivers and lakes, harming marine life.

According to scientific research, glitter can negatively affect the delicate ecosystem that exists in lakes and rivers by stifling plant growth. To combat this, Sienna uses crystals in their glitter polish which provides a high-shine effect without harming the planet.

Their nail polish is also free from benzophenone-1, a carcinogenic compound which is commonly used in nail polish and other cosmetics, including sunscreen. This UV blocker has also been found in human placental tissue and while studies show that small quantities may be harmless, Sienna prefers not to take the risk, and will never use the substance in their nail polishes.

Formaldehyde is also another common ingredient found in other nail polish products that is known to be harmful. In fact, it was once considered a Schedule 6 poison by the Australian government, however products continue to be able to use it as long as they include strong warnings printed on the labels.

Tosylamide is a similar substance to formaldehyde, and it also plays a role in forming a tough outer layer after the polish is applied. Unlike formaldehyde, it isn’t as toxic, but Sienna has developed their range with a better substitute.

Sienna also objects to the use of DBP, or dibutyl phthalate, which causes reproductive or developmental problems. Nor will you be able to find toluene, which is responsible for pregnancy loss and damage to the female reproductive system.

Unfortunately, we still lack the technology to create an entirely clean formula for nail polishes, something which Sienna isn’t afraid of mentioning. On their website, you will find a list of ingredients that they use, and while they aren’t fully free from chemicals, they do not use any nasty components which may pose a threat to our health. 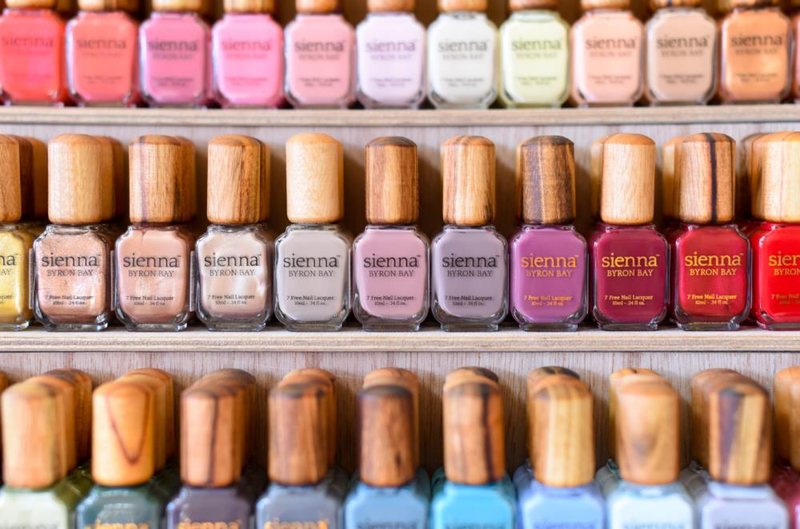 Accountability starts from the ground up

Many brands on the market today don’t practice accountability – they focus solely on products that can sell well, with no regard for what it does to the environment or whether they are being transparent with their consumers. Sienna rejects the conventional methods of marketing and doesn’t employ traditional tactics to convince their customers to buy their products.

Sienna wants their customers to buy their products because they believe in it a hundred percent. One of the first steps they took in this regard was to remove the ‘4-free, 7-free, 21-free’ labels. Brands can market their products a ‘4-free’ simply by eliminating 4 common ingredients or practices found in nail polish such as animal products, gluten, or certain chemicals, but it doesn’t make the nail polish any eco-friendlier than those that don’t have this ‘free-from’ label.

Aside from being misleading to the general public, it also creates an industry of competition whereby companies try to increase the number on the label, to create the illusion that their nail polish is cleaner. Furthermore, as there aren’t any governing authorities that uphold the standards of what ‘free-from ingredients’ is, Sienna believes this marketing tactic is dishonest and they will never partake in anything that isn’t completely transparent.

A simple visit to the website will show you everything that the company includes in their products and what official certifications they hold. 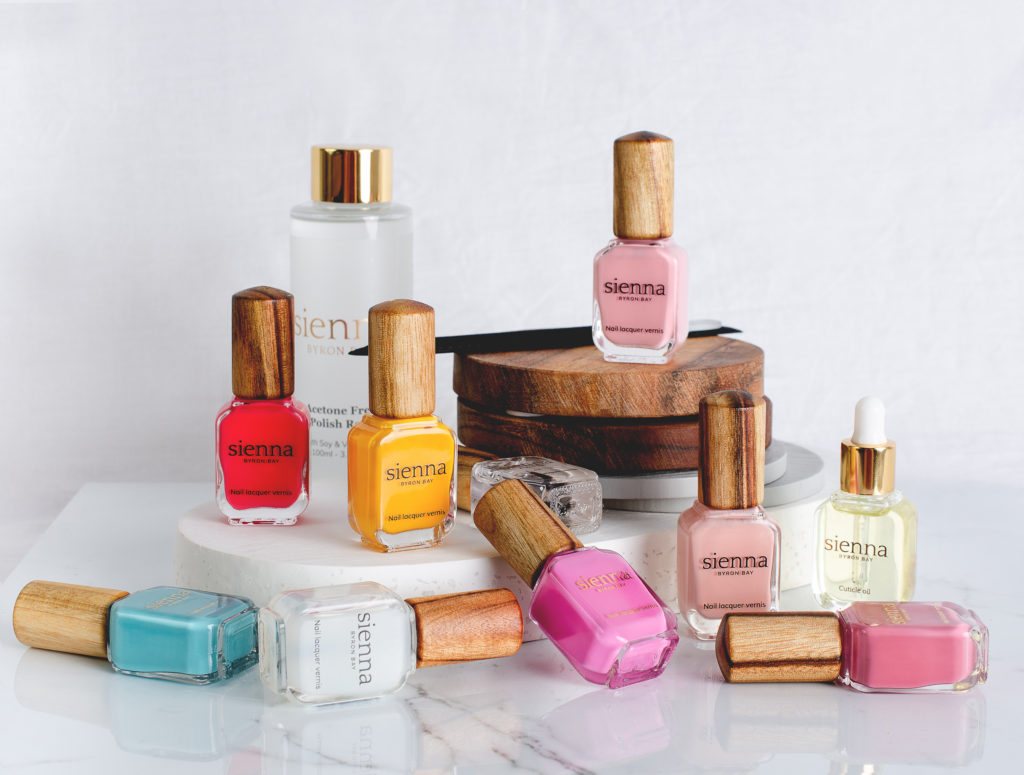 Sienna’s certifications and disclaimers on all nail polish

One of the biggest statements the company would like to make is that there isn’t any official research or testing available for whether nail polish is child safe or suitable for pregnancies.

Why? To run these tests, researchers would have to amass a number of pregnant women and children, subject them to nail polish testing, and follow up with medical checks to determine any adverse effects. Aside from this method, there is no way that a brand can legitimately say that they are child safe or pregnancy safe because there is no research to back that up.

Not only is Sienna a leading force in sustainability and accountability, they are also the biggest advocates on honesty and transparency. They will never make claims that they don’t have the official certificate for.

The certifications they currently hold are numerous and accredited. The Leaping Bunny program announced that they are cruelty-free back in May 2021. They are also Made Safe certified which is a program by Safe Cosmetics Australia, ensuring that cosmetics are free from known harmful substances which have been linked to allergic reactions and skin irritation.

As a brand that also preaches inclusivity, they have both Halal and Vegan certificates so that those of multiple backgrounds may use their products with a peace of mind, regardless of faith or practice.

In regards to their efforts on sustainability, they have achieved B Corporation’s standards for their performance on social and environmental responsibility. Peta, whom the world knows as an organization invested in the rights of animals, has also given Sienna their stamp of approval and acknowledges that they have never tested on animals.

Sienna is a brand that keeps on giving

Sienna has given the world a better alternative to harsh nail polishes on the market that is both kind to the environment and to the consumers who use it. But that’s not all. The company is also giving back to the community through their campaign to rehabilitate sex abuse survivors in Kenya by donating to Rafiki Mwema, making them an ideal of what beauty products should be about: beauty inside and out.