Check out The Beacon for more hilarious, awesome and rad articles.

Recently, Daily Life and Lip have written about the box gap. The box gap is a name given by the internet to the space high up between a woman’s thighs, directly underneath her “box”, if you will. The box gap can only be achieved by slender women, and in having internet tags and pages dedicated to it on social networking and blogging sites, it follows in the noble tradition of the clavicles and hip bones of yesteryear. It’s thinspo.

Thinspo (thinspiration) has a long and varied history on the internet. It’s occassionally banned for being harmful, but given it’s easy to generate, it invariably pops up again. It’s meant to “thinspire” women to get thin. It includes photos users take of themselves, photos they find on the internet of ordinary people, and photos of supermodels. It usually involves soft lighting, bare stomachs, and girls in underwear, leggings or short shorts. Recently fitspiration has entered the picture, “fitspiring” women to get fit.

People to focus on different body parts that are indicators of skinny-enoughness in thinspo pics, and they come in and out of fashion. Ribs were a big deal for a while. Clavicles that stick out are considered attractive, as are visible hip bones. Very thin legs that don’t touch at all came in and out of fashion. With the introduction of fitspo the line between healthy and unhealthy bodies depicted in the picture is blurred. But “x-spiration” is always unhealthy. Sites dedicated to comparing yourself to other women so that you can try to be as “good” are never going to be an excellent idea.

What’s unusual about the box gap is its gigantic, mostly male, Facebook following. While clavicles and hip bones on Facebook have only a few hundred followers and very limited facebook activity, the Box Gaps page has over 25,000 likes. Most active fans appear to be men, who leave hundreds of likes and approving comments on the soft porn photos the page admins post. Girls usually get their thinspo fix from tumblr, where people are already annoyed about Box Gaps on Facebook, when the tumblr community already knows it’s called “thigh gaps”. But the fans on Facebook have taken to “box gap”, and they’re not shy about expressing their enthusiasm.

Take another example: Brendand Pfitzner, who is a claims officer at BT Financial, who feels compelled to comment on a picture of a thong-clad butt where everyone can see what he does for a living and where. What about Darren Quinn, who is engaged to Chellemi Mante-Quinn (she’s already changed her name, apparently). Chellemi has two friends – Darren and his mother, Gwenda Quinn. She joined Facebook last month, and has posted only two photos of herself. Her English writing style seems freakishly similar to Darren’s. She lives in Batuan city, the Phillippines, where one of the local malls has close to 5000 check-ins. Yet, Chellemi seems not to have a single friend in quite a large city. I’m not saying a man who comments on ass pics on Facebook is making up a fiance. Oh wait I totally am.

wtf that makes no sence…. ohh yeah send us pic of your bare asses and your box gaps… but DONT SEND ANY PORNOGRAPHIC IMAGES OR YOU’LL BE BANNED!

A valid point, Matt. But Maya Stotler steps in to clear up the confusion:

Ah, of course. If only I had learnt my shit, and realised that photos of barely-covered vulva aren’t pornographic. As you can tell from both comments, Box Gaps’ fans aren’t the most good at sentence-writing.

If you’re a lady reading this worried about having a box gap, here is something I learnt back in Year 12, when I discussed the thigh gap (as it was then known), with a classmate: stick your butt out far enough and you’ll probably have one.

Now, if you’re a lady who doesn’t care about what 17-year-old me has to say, here is some advice from 23-year-old me: do not give a flying f*ck about box gaps. 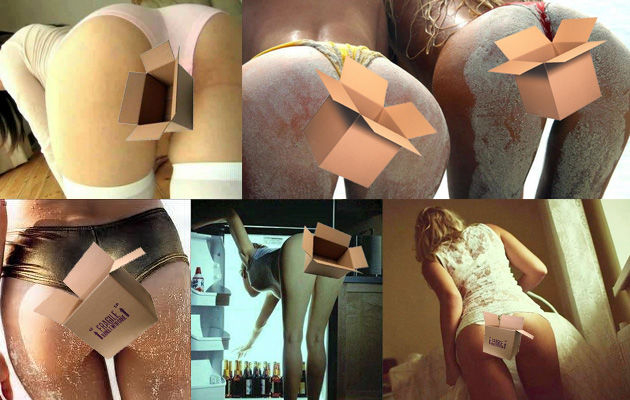