Gail brings quirky from the catwalk to the sidewalk in her Charlie Chaplin inspired collection that is as if one of Chaplin’s old school black and white movies has been Willy Wonka-fied with an explosion of colour. Intricate and unusual headpieces topped off a sleek bun by Redken.

An incredible quirky beauty look by the Napoleon Perdis team was reminiscent to me of a cross between Chaplain and a spanish matador, topped off by vintage insired outfits featuring reds and pom poms that added to the spanish flavour. Cheeky chic are the words that come to mind, and the key is having fun with fashion- not taking yourself too seriously is the clear ethos that Gail intends to communicate.

Bright polka dots, sheers and exquisitely crafted textures made up much of the collection and the splashes of colour were a refreshing direction from the usually monochromatic designer. 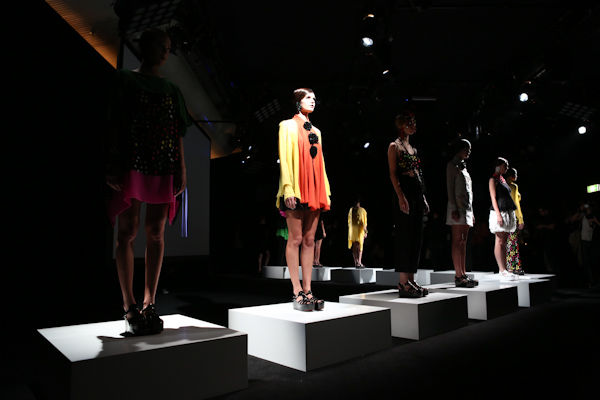 Images belong to Breakfast with Audrey courtesy of Yann Audic