Design Inspire: The World According To Kelly Wearstler

In addition to fashion, I’m also humongously into interior design. The two go hand-in-hand so it’s worked out well. Oddly enough, the interiors obsession began as a child, got swept under the rug (mind the pun) during my teens, and now that I’m a bit, er, “older” it’s returned with a vengence!

I can thank the act of buying my first apartment (which was desperately in need of TLC) for triggering this return to design madness. Of course I set out to simply “refresh” an old bathroom. What ended up happening was a complete gutting – one small “improvement idea” naturally led onto several far bigger ones. I recollect through the demolition haze, this all unfolded at precisely the time I opened a Pinterest account. (“Mmm, hello Pinterest – fancy meeting you here…” It was a bit like THAT.) Honestly, I could not stop pinning. Schemes, dream homes, tapware, rugs, paints, door handles, you name it I pinned it!

To cut a long story short, I’m on the home stretch now with the renovation and I can put off attending pin-a-holics anonymous (at least until the next obsession comes around.) An upshot of the renovation was a new-found appreciation for some amazing interior design stars, which I am going to share with you over coming weeks. These interior designers, in my mind, are beyond talented and it boggles the mind to comprehend how they even conceive their design ideas, let alone achieve them.

As an aside, it’s also interesting to see how the fashion world is impacting on 21st century interior design.Textures, fabrics, colours, details…The worlds are really over-lapping and it makes for great fun if you are a fan of both.

Anyway, I can feel a pin-attack coming on, so please read on… enjoy!

Kelly Wearstler – the queen of maximimalism, where too much is never enough. Known for her layering of “hues” (ie using the several shades of the same colour exclusively in a room), Kelly has developed her own style that is instantly recognisable. Kelly’s rooms are akin to theatre, a movie set if you will – glamourous, ultra-sophisticated havens of sheer luxury. Kelly is big into iterations of Art Deco, anything over-sized, and extreme. Not for the faint-hearted, and also not for the poor, sadly. Kelly certainly does have her detractors who find the interior designer’s work garish and un-liveable, and a little bit too ’80’s. (You can decide for yourself!)

In addition to working around the idea of “hue” Kelly has also mastered the ability to combine otherwise clashing colours together to great effect. Irritatingly for the novice, her combinations of say blue and green, or pink and yellow, just always seem to work perfectly.

I particularly love her incredible way with colours, her heavy use of amazing natural stone, her apparent lack of design-fear, and the high drama in each and every one of her rooms. Kelly has really pushed the boundaries of home interior design, and it makes sense that she is now pioneering cutting-edge hotel and commercial interiors projects all over the United States and the Caribbean.

Kelly has also published several best-selling books, has her own fashion and jewellery line, retail stores, wallpaper collection, collaborates with the Rug Company, and only drinks juice (no solid food.) Hey, I didn’t say she wasn’t a little wacky.. Here are a few of my favourite Kelly Wearstler looks (from my Pinterest boards, of course.) 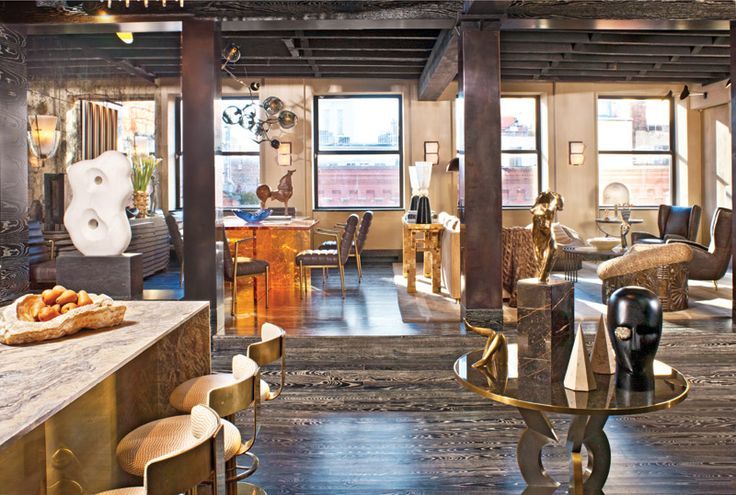 ABOVE: A New York apartment… An eye-watering amount of natural material, tone, and shape. 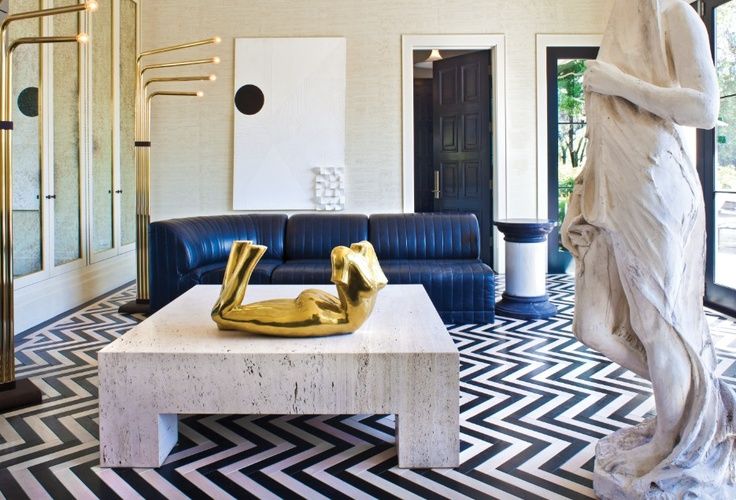 ABOVE: A Bell-Air pool house. That is the house that adjoins the POOL (OMG) 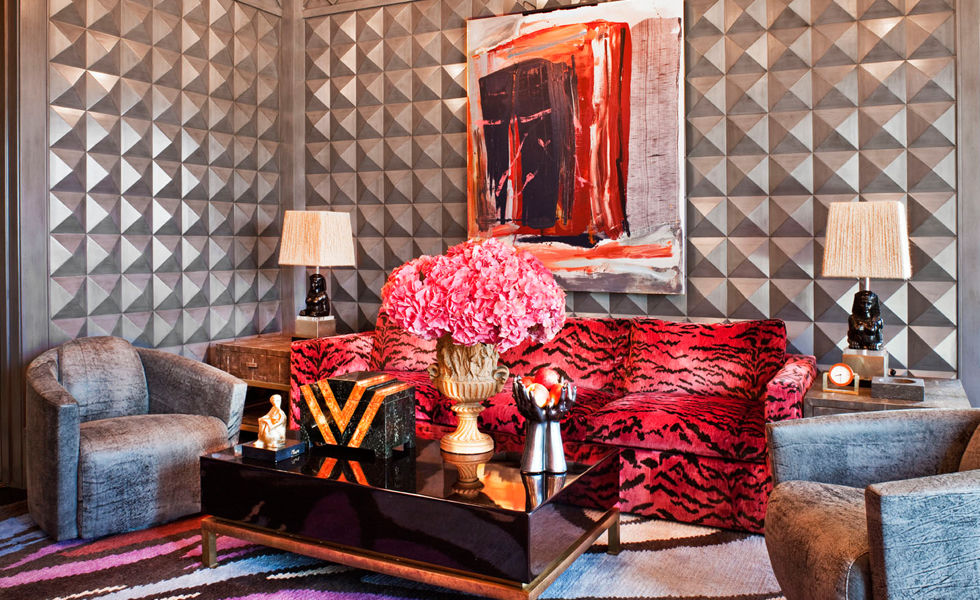 A Bellagio residence… Yikes. I’m less of a fan of this, but it’s a great example of use of wall treatment and colour. 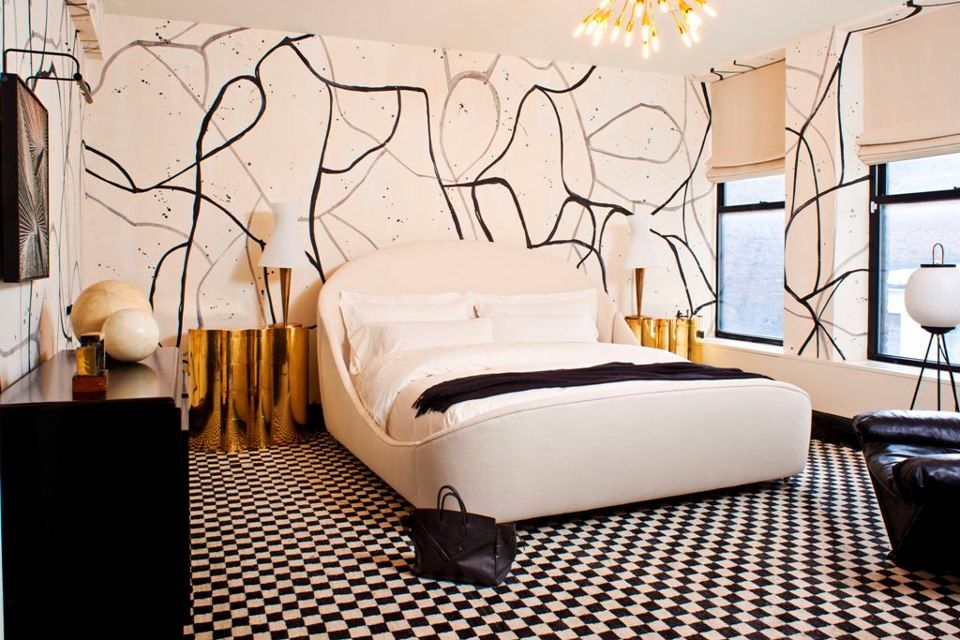 ABOVE: I’d sleep here. An artistic expression of black, white and gold. 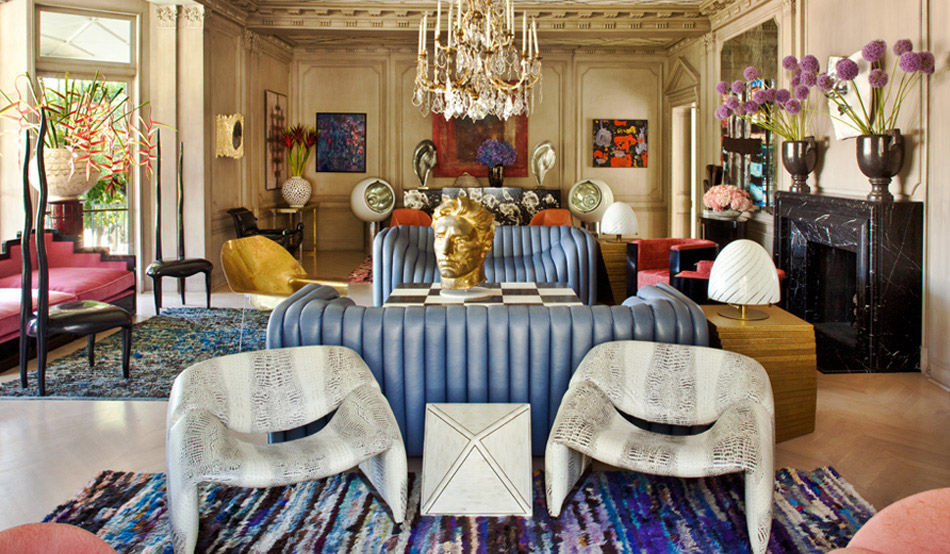 Kelly’s Malibu “Beach House”. So many colours, so much amazingness. 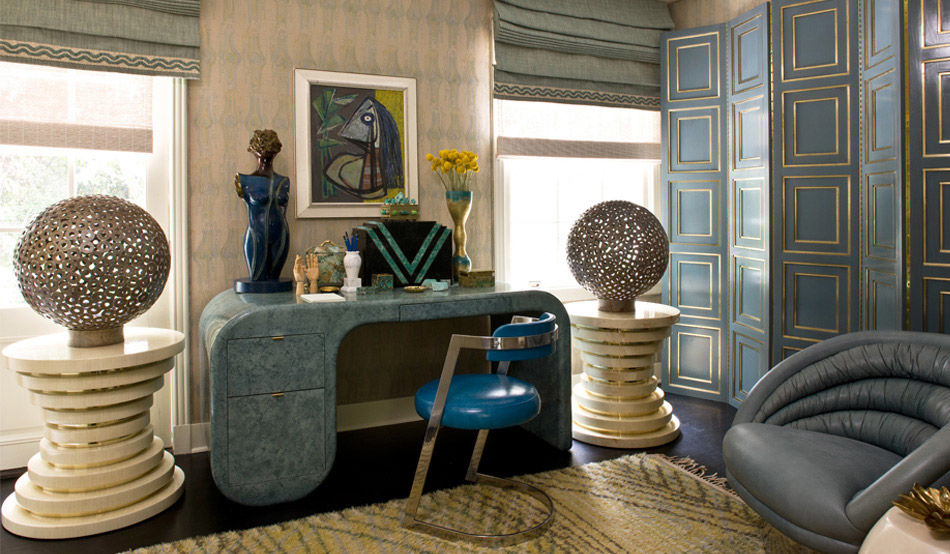 Hue – Blue on Blue on Blue. Plus, Art Deco, 80’s, natural stone, sculpture, cubism, and pretty much everything else. 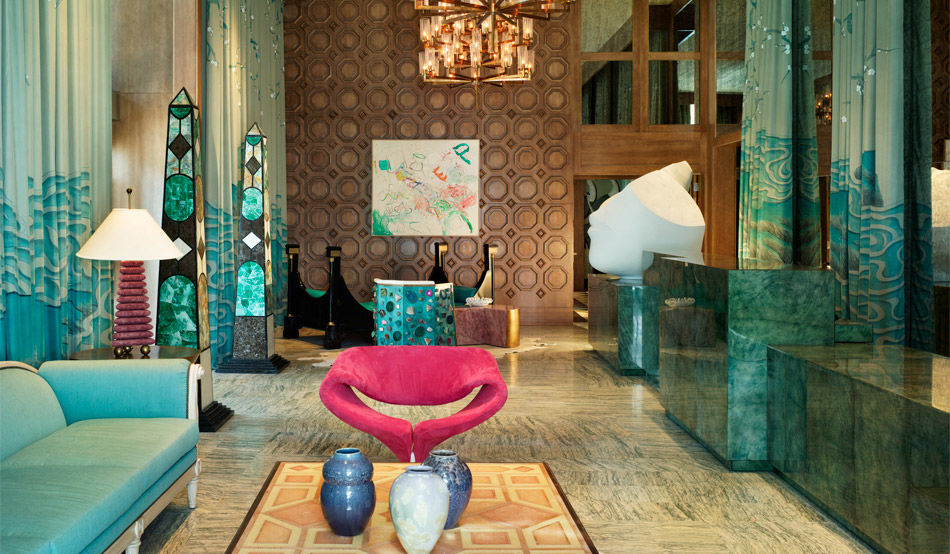 Malachite-toned hotel lobby with lots of stone and shapes, and contrast. 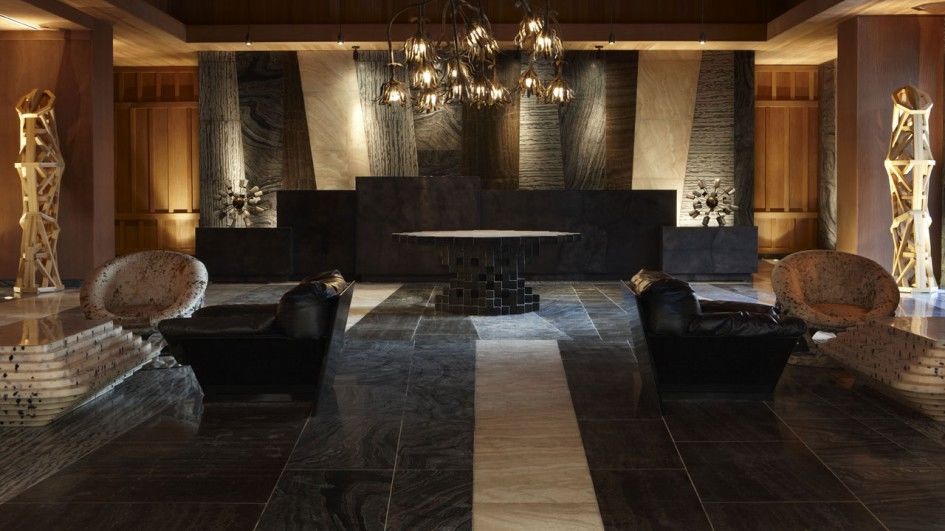 An unlikely lobby for a Caribbean resort… Typical Kelly I guess! 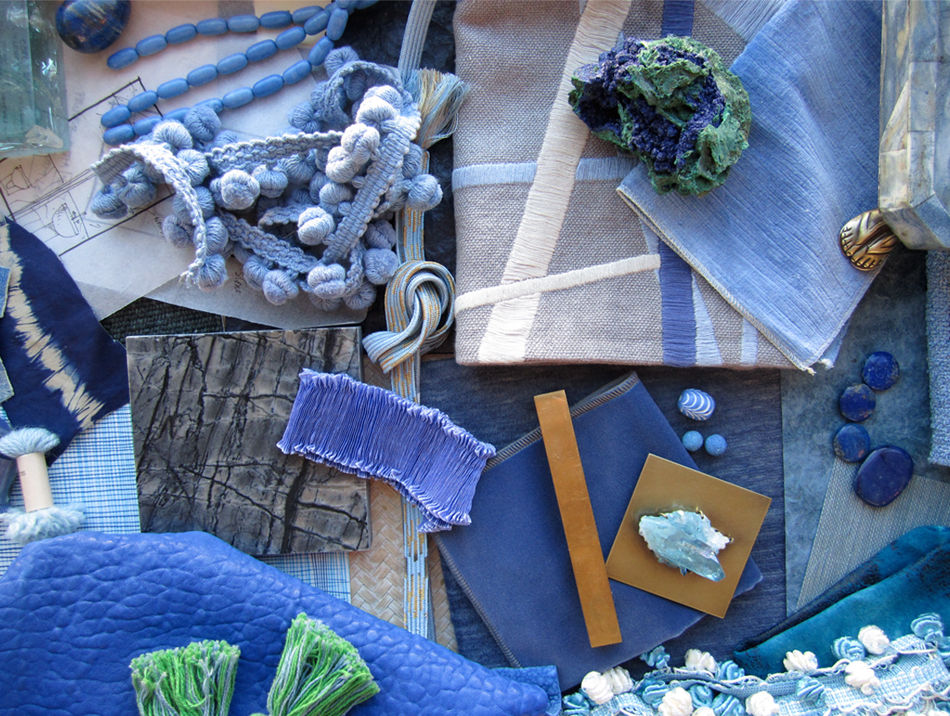 One of Kelly’s mood trays, sublime…

So, that’s the maestro Kelly Wearstler! Love it? Hate it? Tell us what you think in the comments below, (and earn BWA Dollars for your comment!)

Be sure to read… TOP FIVE AUSTRALIAN INTERIORS BLOGS TO FOLLOW 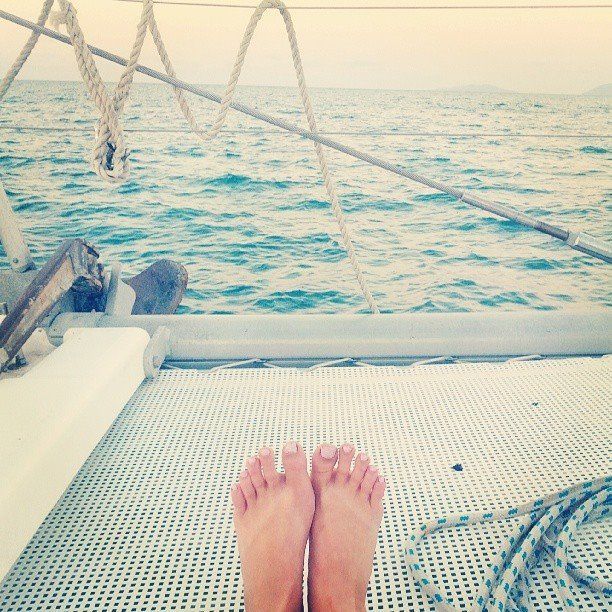 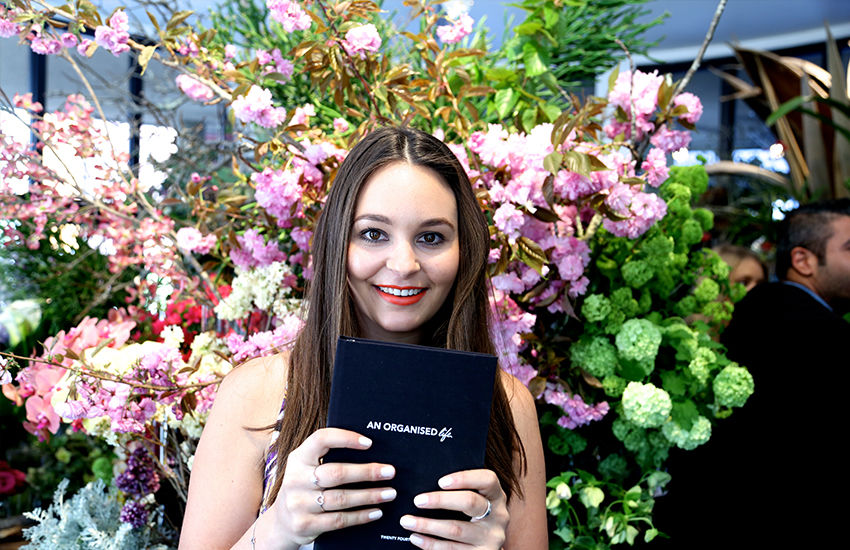